Skip to content
You are here:
Home > Latest News > Autumn in the College gardens
Back to list

Autumn in the College gardens

Autumn is coming to an end although you could be forgiven for thinking it is still summer with the temperatures we are having. The major plus side to this extraordinary weather is that autumn colour has been fantastic and prolonged this year. 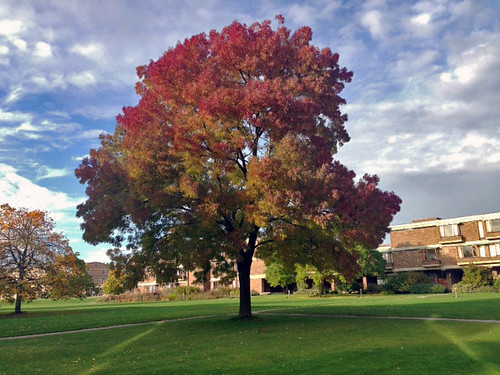 The Parthenocissus tricuspidata (Boston Ivy) on the squash courts has been featured on websites and in several newspapers including the Times. Other highlights are the many trees with their stunning colours including the Sophora japonica (Japanese Pagoda Tree), Liquidambar styraciflua (Sweet Gum) and the Fraxinus angustifolia ‘Raywood’ (Raywood Ash).

New trees in the mini arboretum planted in October 2014 are already starting to show their potential. The bronzes of the Koelreuteria paniculata (commonly known as Pride of India or the Golden Rain Tree) and the reds of the Acers are the highlights of this area for Autumn colour.

The Orchid collection in the greenhouse is growing and flowering well. We have also planted several varieties of hardy orchids outside so we will see how they fair this winter. One of the most spectacular orchids in the collection to have flowered over the last month or so is the Dendrobium thyriflorum which generally flowers in April but can also flower in August/ September. We were lucky that it flowered at both times this year.

Other notable orchids for the autumn have been the Ascocendas (a cross between a Vanda and an Ascocentrum) which grow with aerial roots taking up moisture from the atmosphere. These just seem to flower and flower for months on end.

Musa basjoo a hardy Japanese banana which survives outside in one of the courtyards has produced bananas this year. We wrap them up in fleece and straw for winter and they have taken about 8 year to flower and fruit. The bananas are only tiny and not big enough to eat. The mild winters and warm summers have contributed to this near success!