Skip to content
You are here:
Home > Latest News > Learning from success and failure – what it really takes to be a successful entrepreneur
Back to list

On Monday 30 January the College hosted a challenging and topical debate about enterprise and entrepreneurship to a wide-ranging audience of students, alumni and friends from Churchill and the wider Cambridge community. Chaired by Simon Jones (U85) the panel of speakers was led by a panel of entrepreneurs with a Churchillian connection; keynote speaker Steve Ives (U77) and panellists Julie Kilcoyne (U&G 90), Paul Higgins (U02), David Holden White (G14) and Brian Moyo.

Dame Professor Athene Donald made a welcome address that communicated the clear rationale for holding such an event at Churchill College with its statutory bias towards science and technology — and also gave her approval to one of the key themes of the debate; the fundamental importance of how to learn from failure as well as success, noting Churchill’s own views on the subject:

”…no boy or girl should ever be disheartened by lack of success in their youth but should diligently and faithfully continue to persevere and make up for lost time.” – Speech, University of Miami (Fla.), 26 February 1946

The keynote speaker for the debate, Steve Ives, Founder and President of Taptu Ltd, used his many years of experience to tease out insights on how to think like an entrepreneur, distilling his key learnings as follows; spot a ‘megatrend’ early and position yourself to ride it by assembling a top team of the right people with tech/engineering expertise who can build a product to address a customer need in the middle of that trend and just as crucially, identify and negotiate a graceful exit at the right time. Noting that some ‘megatrends’ were predictable but others were far less so and would take everyone by surprise he pointed to Koomey’s law – that for any given computing load the amount of battery power you need to drive those computing operations will fall by a factor of two every year and a half – as being a driver of progress that would hold some really exciting business opportunities for the next 15 years, most notably around the internet of things.

He also highlighted a different but perhaps even more exciting ‘megatrend’ that was opening up, based on the rapid reduction in the cost of sequencing the human genome.  There were tantalising signs in this data that mutations in critical genes in the nuclear and the mitochondrial DNA caused diseases like Parkinson’s and Alzheimer’s. New diagnostics and drugs developed from these insights could potentially solve one of society’s biggest problems – the cost of managing age-related diseases.

“To win big in infotech or biotech, you need to build the best core team then run very quickly with that team.  As a Cambridge student and especially as a Churchill student you are in a great place to meet these best people and bounce ideas around.”
— Steve Ives (U77)

Steve’s central piece of advice around the importance of recruiting the right senior people was also touched on by panel member and fintech* entrepreneur of Crowd Valley, Paul Higgins, who described his company’s novel approach to avoiding costly and time-consuming recruitment mistakes by testing compatibility. They don’t hold interviews – if you are interested in joining the company you just work with them for five months and then take it from there.

Julie Kilcoyne, Founder and joint CEO of Edtech firm Boardworks advised looking for something that you really understood – for Julie, who started her career as a teacher, electing to build a start-up that produced digital tech for schools was a natural fit. She also counselled the importance of building a fantastic team around you; as important was to understand the roles of each team member. 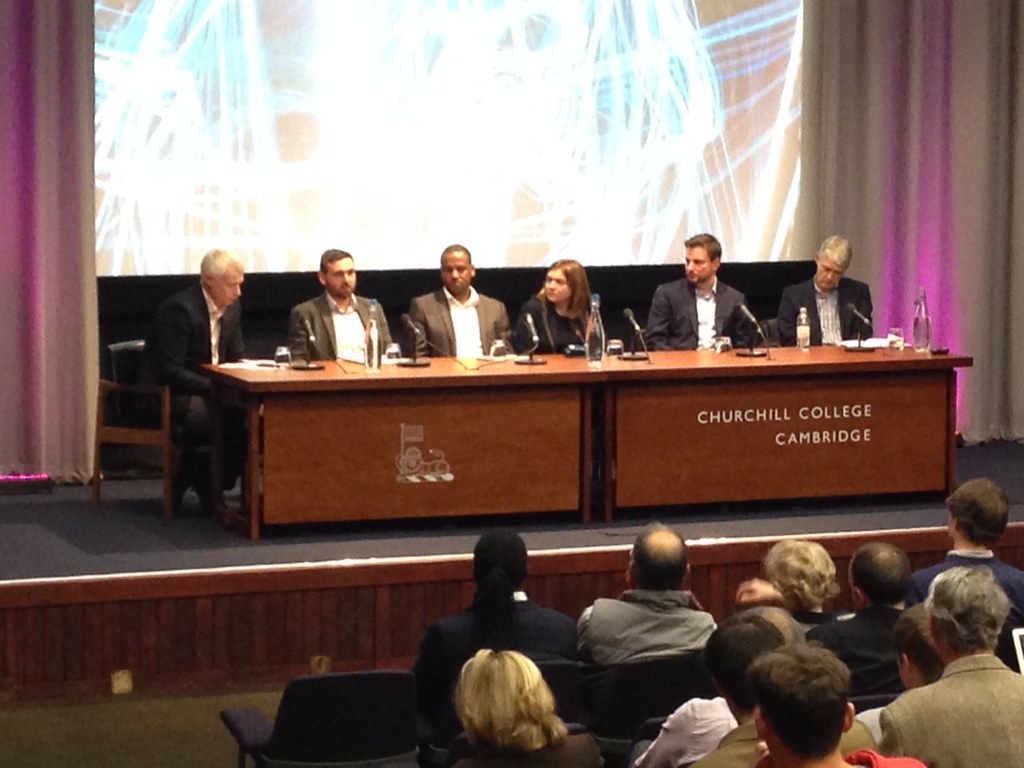 David Holden-White, winner of last year’s Churchill Enterprise competition and co-founder of Biotechspert was the newest entrepreneurial voice on the panel and echoed the need to identify the right idea, the right people, the right money, and the right organisation. He also advised considering whether or not the potential final revenue would be enough to justify the costs, adding that when it came to the right organisation it was important to make use of the free tech available on the market to organise your accounts and software. Finally, Brian Moyo, a qualified psychiatric nurse with a successful start-up in healthcare recruitment, MSM Healthcare also demonstrated the importance of focusing on something you knew about as a great starting point for a start-up and made a final plea to all those in the audience who might have an idea to get on with it and give it a go!

*Fintech: computer programs and other technology used to support or enable banking and financial services.

The debate was followed by the opportunity to continue the conversation as well as meet with representatives from a range of local Enterprise related groups including Cambridge Enterprise, CUTEC, The Judge Business School Entrepreneurship Centre and Cambridge Network Ltd, over networking drinks.