Skip to content
You are here:
Home > Latest News > Royal opening for Cowan Court
Back to list

Churchill College celebrates the official opening of its latest facilities by welcoming a member of the Royal family today.

HRH The Duke of Gloucester cut the ribbon at the entrance to Cowan Court as part of a ceremony attended by 130 guests comprising: Fellows and staff, benefactors and alumni.

The Royal party, including Sir Hugh Duberly, the Lord Lieutenant of Cambridgeshire and the Duke’s Private Secretary Colonel Alastair Todd, was met by the Master, Dame Athene Donald and other College officers, staff and guests.

HRH The Duke of Gloucester congratulated all those who played a part in bringing the project to fruition and wished everyone the very best of luck to all those who will come to use the building. He said:

His Royal Highness the Duke of Gloucester and Professor Dame Athene Donald, Master of Churchill College.

The new £10.6 million facility provides 68 hotel-standard double ensuite bedrooms, in addition to a new multi-purpose meeting space called the Sixties Room, after a group of early students at the College.

Cowan Court which is named in honour of the Benefactor Michael Cowan, an alumnus of the College, also includes three fully accessible bedrooms for disabled visitors and residents. Speaking at the opening about the new facilities he said:

“Going forward we at Churchill wish to attract some of the best undergraduate candidates from the World and we compete for them against many other well-endowed colleges and universities. Good facilities do matter.”

The Duke of Gloucester has long-standing connections with Cambridge and gained his Diploma in Architecture from the University in 1969. As a student he was taught by Professor Marcial Echenique OBE, Professorial Fellow at Churchill, who was part of the VIP Party to greet him.

“We were delighted to welcome HRH The Duke of Gloucester to carry out the official opening of Cowan Court. It is a fitting celebration to mark the conclusion of this project which has involved many different consultants and contractors, as well as staff here at Churchill. I would like to thank everyone who has contributed to its completion and we can all look forward to enjoying its excellent facilities for many years to come.”

Bedroom in Cowan Court as set up for a conference guest.

The new building has some Scandinavian overtones, with pale decoration, bespoke furniture, a tree-filled courtyard and large outward-facing windows in all rooms. It is also in keeping with the College’s environmental and sustainability strategy. Green credentials include a highly-insulated building ‘envelope’, comprising a glulam timber-framed building clad with reclaimed oak; photo-voltaic cells on the roof to provide more electricity than the building will consume; and natural ventilation with opening panels to either side of the special solar glass in the triple-glazed windows. The trees inside the courtyard will provide shading for the corridors running around each floor.

The Courtyard of Cowan Court.

With the addition of Cowan Court, Churchill College can house all its undergraduate students throughout their degree, in term-time and now offers a total of 200 ensuite bedrooms available for conference clients during vacations, in addition to 250 standard bedrooms. These complement Churchill’s existing Dining Hall to seat 400 and purpose-built Lecture Theatre for 300.

View our Flickr album of photos from the opening event. 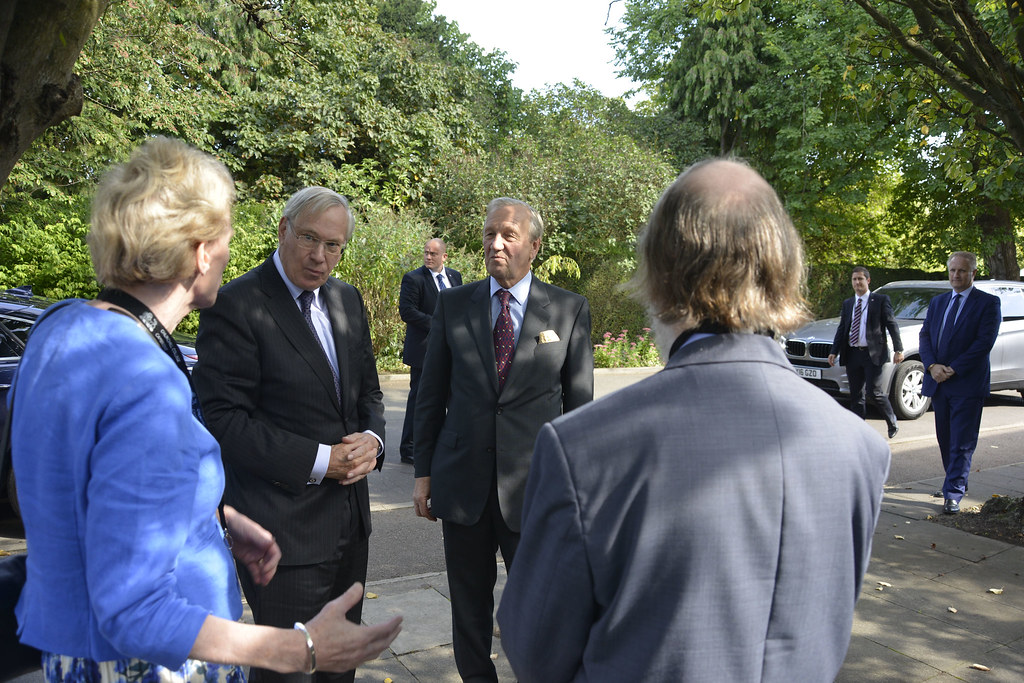