In September, CCBC members past and present gathered at the Combined Colleges Boathouse for a special occasion of a boat naming of a new women’s IV.

The boat was bought and named in memory of one of the first women rowers, Lorna Montgomerie, who sadly died in 2019. Lorna was amongst the first thirty women who matriculated in 1972: the year that Churchill, alongside Clare and King’s Colleges, admitted women (though Churchill was the first College of the formerly all-male Colleges to make this decision in 1969). 2022 therefore is the year that we celebrate 50 years since women were admitted to Churchill.

Lorna was originally from Scotland and came up to Churchill to read law, and from there worked in legal publishing. Lorna was also the College’s first rowing blue, along with Helen Swallow, in 1974, when Cambridge beat Oxford.

The majority of the funding for the new boat was generously donated by Lorna’s friends, the rest being made up by other CCBC general donation. The fundraising was initiated by Helen Ilieve (née Swallow), who coxed for CCBC and was in the same year.  Helen and Lorna became lifelong friends after meeting at the College. Lorna also met her husband John Anderson (U73) at Churchill.

The Master, Professor Dame Athene Donald gave a welcome speech at the reception, where about 40 of Lorna’s friends had gathered alongside many CCBC current members.  Helen Ilieve gave a speech, as did the current CCBC President, Lauren Price. We were honoured that John Anderson named the boat after his late wife, with their children Neil and Ruth present. See the photos in our Flickr album at the bottom of the page.

This event formed part of our busy Association Weekend 2022, which was a welcome return to our ‘normal’ pre-pandemic format. Guests were offered 3 interesting talks in the Wolfson Theatre over the weekend, all of which were recorded and can be watched on our YouTube channel. Additionally, alumni had a choice of our ever-popular Wine Tasting event or High Table on the Friday night and we then welcomed around 170 guests to our Association Dinner on the Saturday with guest speaker, Fellow Professor Giovanna Mallucci. There was still plenty to do on Sunday what with our ecumenical Chapel Service led by Rod Symmons (U74), the boat naming ceremony and – in what we hope will become a new tradition – ‘Cocoa and Cakes’ in fond memory of Canon Duckworth. 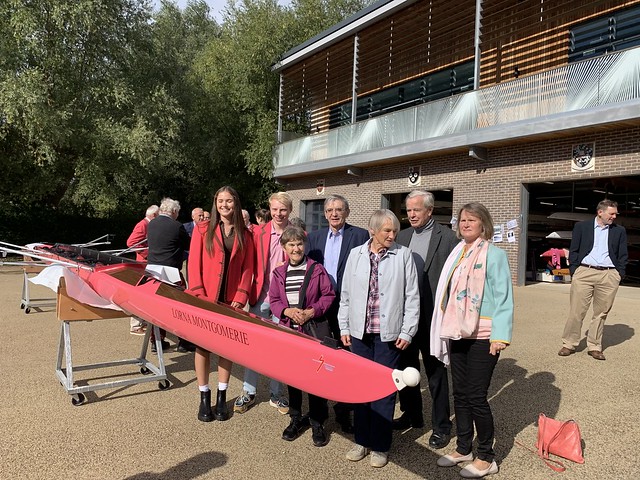